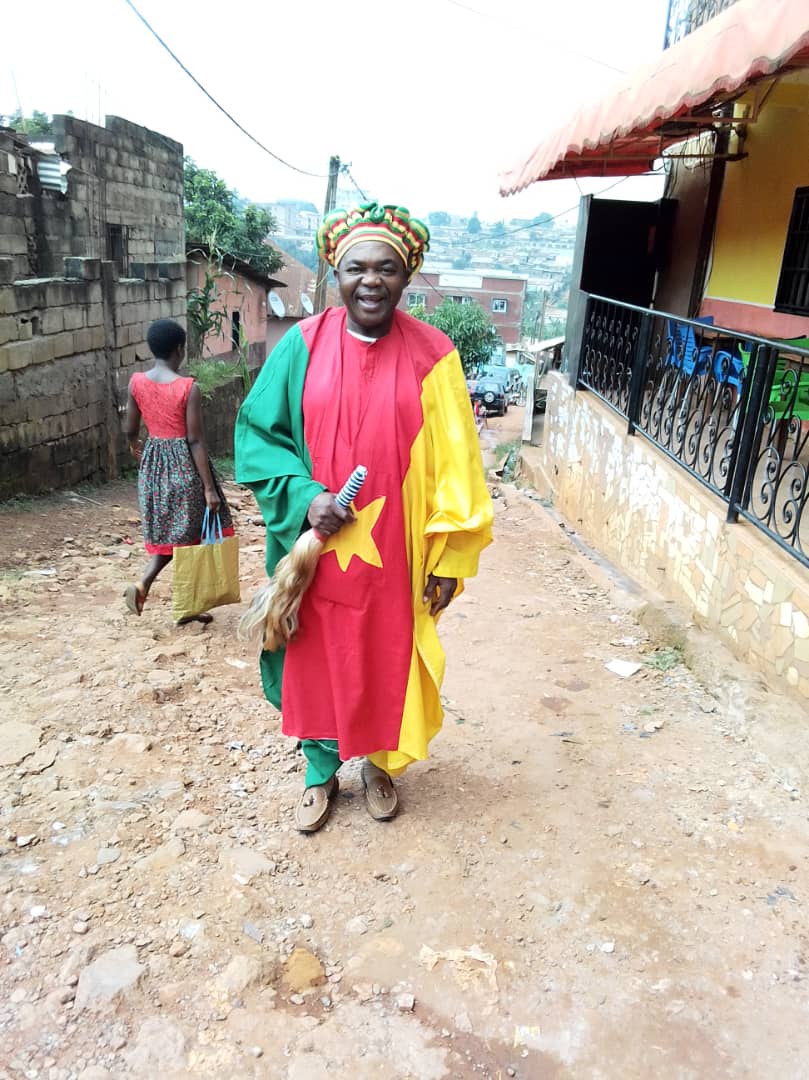 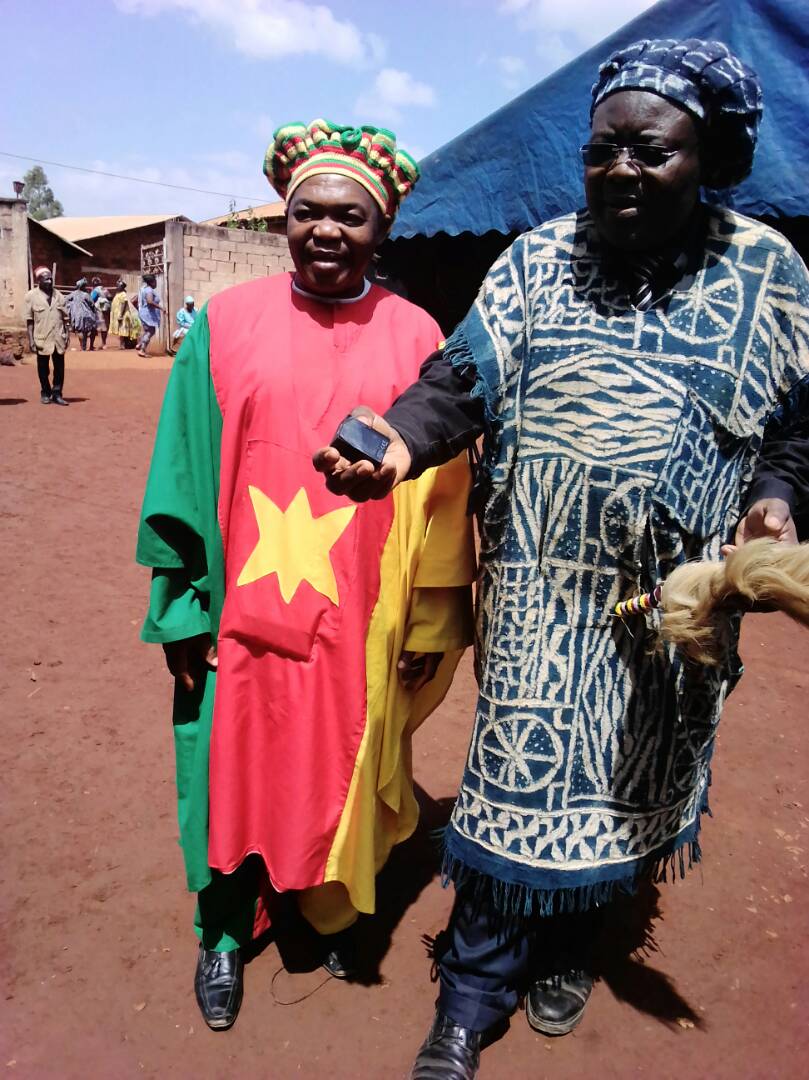 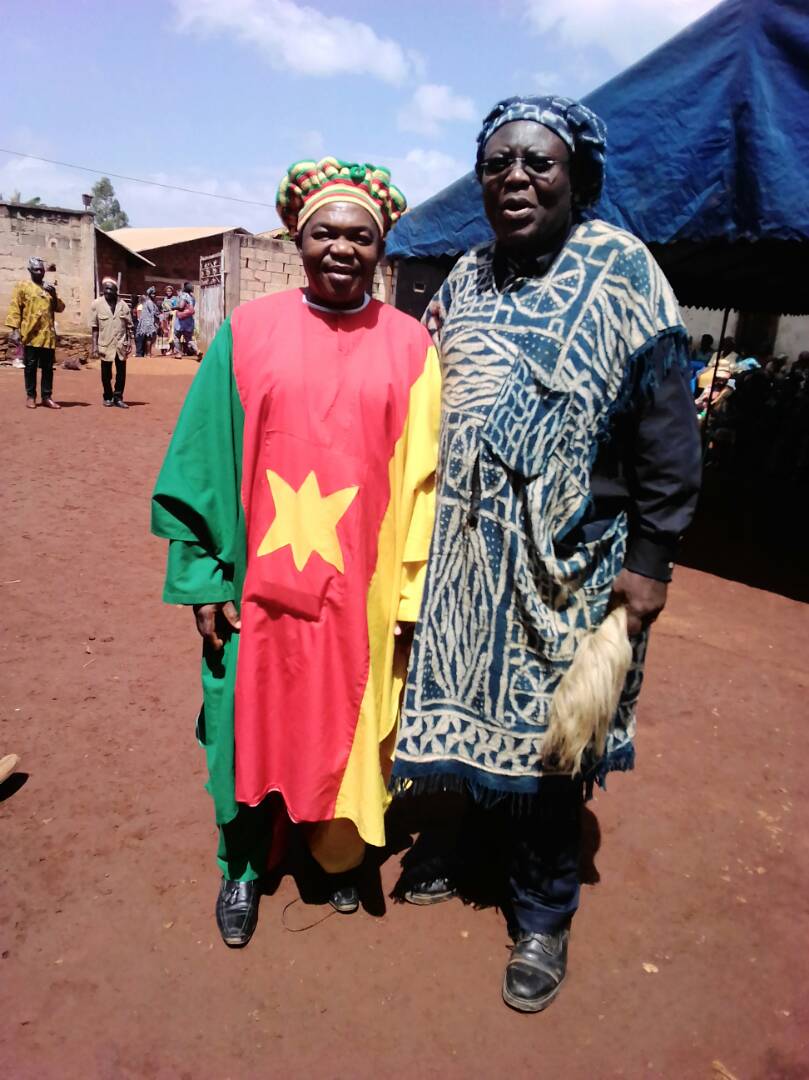 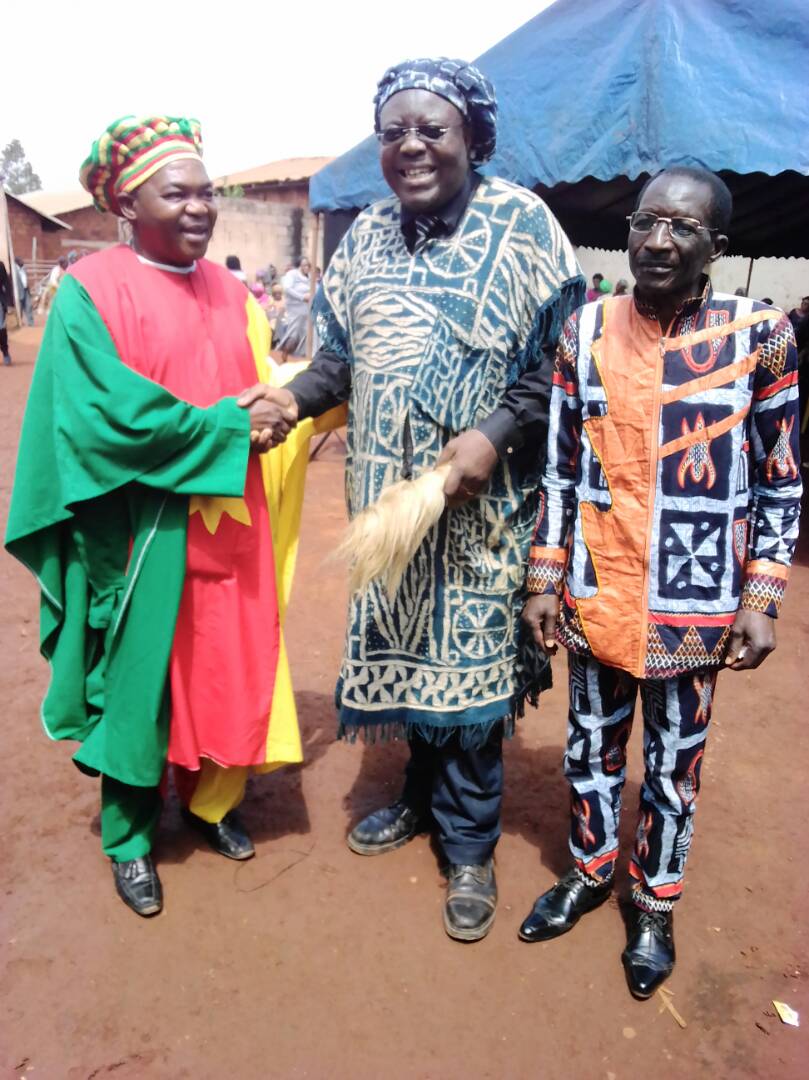 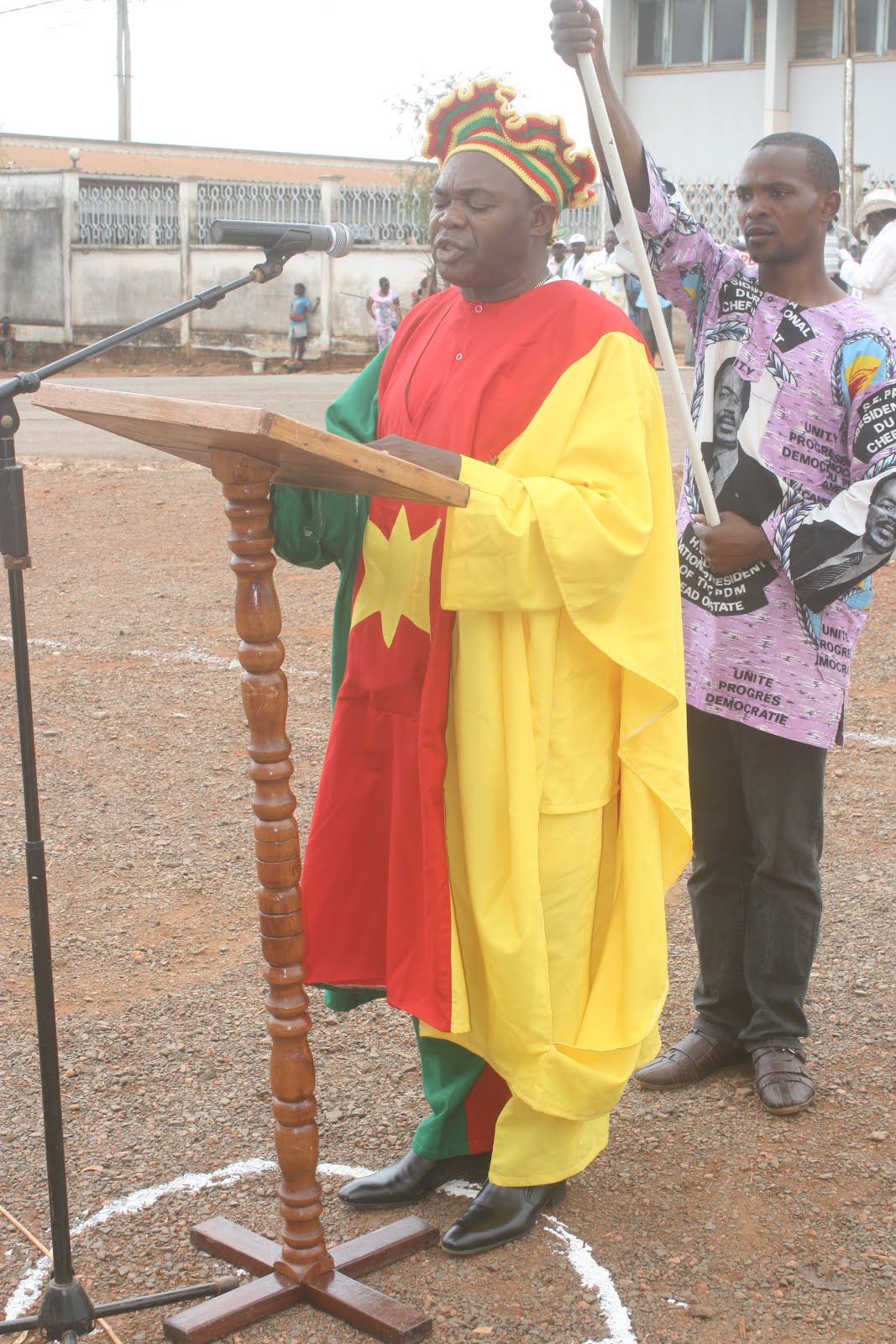 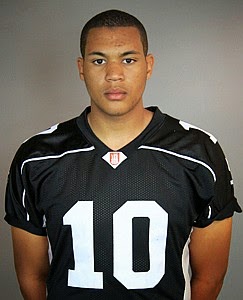 Manifestations in Dschang, Yaounde and many other cities

You may have seen in the news that there have been rioting and a lot of disturbance in . We traveled to Dschang, where Antoine's mother is living which is about 7 hours (on a good day) by bus from . We left Sunday night, February 24th a week ago. The strikes and rioting started Monday, and then continued through Friday, February 29th. We were able to get on a bus Saturday and travel to to collect our computers and head back to Dschang. In a way, we’re going to the bush, to start our own kind of Macquis. has a very rich heritage in fighting for their freedom and did so for 12 years with much blood shed, from 1948 – 1960.

It is a village, and quite unlike anything I have ever lived before. We are fortunate in that Antoine's brother, Michele has a house in the family compound which has running water (complete with small hot water heater in bathroom) and indoor plumbing. There can only be a hand full of houses with such facilities in all of Dschang.

Things in this country are really bad…the conditions have deteriorated and the reason for the strike is that the government added 16 Fcfa more tax to the price of a litre of gas. Food prices have escalated to the point where a great many people can not even afford to even buy food. What they used to be able to buy for a family, they can no longer afford. The young people are fed up, with no hope, no jobs and they are hungry and angry, very angry. So although what started on Monday as a strike with the taxi cab drivers, continued with the angry expression of the young people roving the streets, blocking the roads, and breaking into stores and destroying property, no matter who’s property it is. They take tires, old cars and anything else they can get their hands on and put them in the middle of main streets in the town as well as roads leading out of town and light them on fire thus the term "the country is blocked". This is what they call “manifestations”.

They want this man - gone forever!!! This was over a price increase of a few Fcfa of gas. Just wait until the President attempts to change the Constitution to let him stay in power and permit him to run for a third term in 2011. This country will go up in flames - because the youth will block this country. They are not a part of this system, have not effectively been paid off. They have nothing, and they have no hope. They have no families, only themselves to take care of. This means they have nothing to lose and that makes them very dangerous.

The afternoon of Monday, February 25th, the day we first arrived in Dschang, we decided to walk up to the main part of town where there were a lot of people milling around the street. Earlier in the day when we arrived at , the bus was blocked, stopped from advancing, literally, as a tire was burning the middle of the street. Antoine suggested to those youth, that the destruction of public property could only lead to their arrest, and suggested that they should choose a different venue – where they weren’t destroying public property. That afternoon, we saw the result and the tire was burning in the middle of the round about instead.

Most were young men and it was obvious to us that they were not organized; in short, they had no leader! As we strolled through this melee, Antoine began to speak to some of them. He is really good at this; he can just walk up to someone he has never met before, someone in the street, and start talking to them. He will ask them a few poignant questions which lead them to start thinking, and are then ready to listen to what he has to say. As he did this in the center of Dschang, a HUGE crowd gathered around us. It was a bit scary but I stood my ground and prayed and asked for protection. As more and more people gathered around us (there were probably several hundred people by this time) a couple of guys came with a free standing sign which had a bar across the bottom that was about 6 inches off the ground. They begged him to stand on it, so all of the crowd could see him and hear him. A ready made platform, literally. They were cheering and he spoke to them.

The chants were of our political party (RDPF KUMZSE), and “BIYA must go”. The crowd roared. After about 10 minutes, they even asked me to stand on this sign and I spoke as well. Wow! You could hardly hear yourself think – and all of this was spontaneous. Not planned. What you need to know is that Dschang is the place where Antoine’s grandfather granted his political party (KUMZSE) and was president of that party in 1948 – even before ’s independence. This is the home of the Marquis and is a powerful region in the West of Cameroun. Many people remembered Antoine granting RDPF (KUMZSE) and running his presidential campaign in 1997. It was in 2000, that he went to after the company he established in was burned out by the ruling party. They seem to like to burn things they aren’t happy with here.

While all of this was going on Monday through Friday of last week, all stores were closed for fear of vandilization so we could not even buy supplies or bread or anything until Friday. The good news is that at least in the village there are surrounding farms - even within the town limits - so we were able to eat even if very simple foods. In these situations protein becomes a luxury.After Monday, March 3rd, we will have our laptops and may be able to plug our computers in at the for an hour or two, twice a week, if we're lucky. That is what we're hoping for. Otherwise, until further notice, emails will be the best way to reach us.

We will begin to organize the young people in Dschang as this is where we will now focus our political party work. Dschang is the place where Antoine granted the seat of our political party RDPF KUMZSE in 1996 so that he was eligible to run in the 1997 Presidential elections. It is important that people know and understand what we are campaigning about. This is not just about getting rid of a dictator. It is about implementing a social plan which will enrich the lives of the citizens, so that maybe, just maybe the children, the future of this nation, will live a better life. We’re all clear that what we do today will impact future generations, and that is why most people who understand what we’re doing and why, are willing to at least listen.

You have to understand, in this country, the word of one man is absolute law. Since these manifestations last week, the President has sent his own military (which is supposed to defend the citizens of from outside attack) into the streets with weapons to intimidate the population and keep them in fear. If they are in fear, maybe they can be controlled. We saw this clearly as we were on our way to the bus stop in , Sunday night. Several bands of armed military were walking the streets with ‘guns at the ready’.

This is just the beginning of a very dangerous time for . The largest percentage of the population is the youth, those between the ages of 16 and 30. At age 20 they are granted suffrage. But most of them do not know what democracy is let alone how to exercise their voice by calling for a referendum vote, to oust this President from his position of ultimate power. There are actually two Constitutions in this country which are alive and well. One is what was granted when this country was ‘given’ its independence in 1960 and which created the system which allows for a centralization of power and the mechanism to allow one man total and absolute power over everything. Even though the second Constitution created a multi-party system and gave those of age, the right to vote, they have not been taught what this really means to them. The power to live and die, is in the hands of the few ‘elite’ those who have no intention to implement social programs which will benefit anyone but themselves. And those programs which are in the ‘public eye’, never see their realization as the money usually finds its way into the pockets of those ‘public servants’ who are the administrators of such programs. Is it any wonder that the people of this nation, nay I say most nations in are still living under the domination of the few, or ruling political party. It is only those of the ruling political party who have been paid off, bought, who are trying to keep this system in place. And now, these groups of youth who are not part of this system are trying to find a way to organize themselves and force change.

You tell me, who will win out? How much blood will be shed in the process? And how can Republics and other supposed democratic nations continue to allow this suffering? When will they step up and actually, through a process as set out by their own Constitutions, teach their younger sibling nations how democracy works; help teach the citizens of these nations that they need not be burdened by dictators who care nothing for their well being? When will these so called developed nations reach out their hands to those leaders deemed “opposition leaders” who do genuinely care for and have a plan, a platform which when implemented will provide the structure to decentralize power giving it back to the people where it belongs, and support them to create change internally? True change can only come from the inside, the grass roots level; it will never last if imposed from the outside. Those of you, who know me, know that is what Antoine and I are here, in fighting for.

Posted by QNefertiti at 7:20 AM Links to this post